Given the catastrophic human rights situation, enormous social inequality and persistently high levels of poverty in Mexico the question of the social, human rights and environmental impact of the „modernization“ of the EU-Mexico Trade Agreement is of paramount importance. In May 2017, Misereor, Bread for the World and the FDCL, in a joint study, already pointed to a possible worsening of conflicts and social crisis as a result of the planned trade liberalization commitments in the area of investment, intellectual property and energy. [1]

So far, on the European Union side, the possible effects of the agreement have not been fully investigated. We therefore welcome the European Commission’s decision to fully explore the potential economic, social, human rights and environmental impacts of the Free Trade Agreement through a Sustainability Impact Assessment (SIA). At the same time, from our point of view, it is completely unacceptable that the SIA will only start at a time when the negotiations are nearing completion.

Both negotiating parties have repeatedly stated that they wish to finalize negotiations on the Global Agreement by the end of 2017.

This approach blatantly contradicts the Commission’s own guidelines for implementing SIAs and the declared objective of enabling better consideration of sustainability and human rights aspects in the negotiations. [2]

According to the EU, SIAs are independent ex-ante investigations, they are launched soon after the Council of the European Union has formally authorized the Commission to enter into trade negotiations; in general, not later than 6 months after the start of negotiations, to ensure that the analysis can usefully feed into the negotiating process at a useful stage. [3] In fact, the European Commission only assigned LSE Consulting with the implementation of Mexico SIA in October 2017, while the negotiating mandate to modernize the Global Agreement had already been issued by the Council to the Commission in May 2016. Since then, a total of six rounds of negotiations have taken place. The next round of negotiations is scheduled to be held in Brussels from 18.12. – 22.12.2017.

In accordance with the Commission, the SIA should also rely on a broad consultation process of the relevant stakeholders in the EU and in the partner country. The purpose of the SIA is to bring to the attention of negotiators in good time the potential impact of the trade measures under negotiation and possible trade-offs, thus to support sound policymaking.[4] However, the timeline and consultation plan contained in the Inception Report of 5.12.2017 provides for local workshops in the partner country only in the seventh month of implementation, i.e. after the completion of the interim report. The results of the SIA will be presented with the draft final report after a total of 10 months.

If the EU Commission were to maintain its negotiation time schedule, it would generally be impossible for the results of the consultations and the SIA as a whole to influence the negotiations in terms of human rights and the Sustainable Development Goals (SDG). In the absence of prior assessment of human rights risks, the Commission thus lacks the necessary empirical basis to meet the requirements of Articles 3 and 21 of the Treaty of Lisbon, according to which the EU must respect and promote human rights also in its external trade relations.

Against this background, we expect the Commission to:

We call on the EU Council and the Members of the European Parliament to: 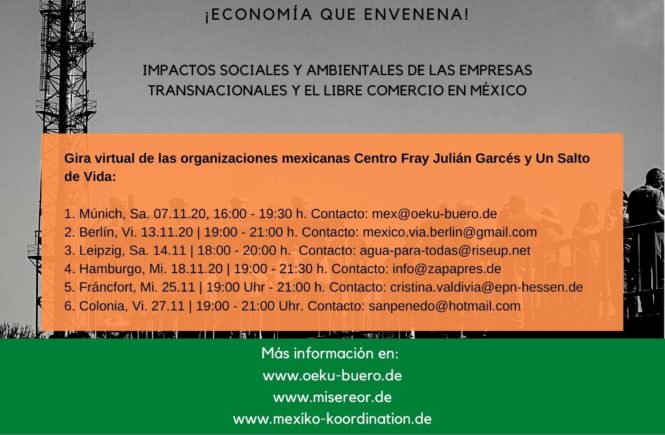